What Is It Like Being a Research Analyst? Interview with Kahaari Kenyatta HCC '16:

We are honored to have Kahaari Kenyatta on the MyHealth Career Navigator blog! Kahaari was an Health Career Connection intern in 2016 and is now a Research Analyst at Ipsos Group S.A. In this interview, Kahaari shares how he got his role at Ipsos with the help of LinkedIn, what he had to learn on the job, and why relationships are still everything. MyHCN: You are currently a Research Analyst at Ipsos Group S.A. in Washington D.C. Can you describe the journey that led you to where you are now?

Kahaari Kenyatta: As a Health Career Connection intern in 2016, I was placed in the Lower East Side in New York working with the Two Bridges Neighborhood Council and the Mount Sinai Adolescent Health Center. We primarily canvassed local businesses there, but we also did community research. We were specifically interested in how the community felt about changes such as gentrification and how that impacted their access to health care. Some months after that internship, I came down to Washington D.C. and began working at an applied research consulting firm. The clients were government offices, and I was involved in the logistical and operational side of things. I ran different surveys. The firm actually reached out to me for this position—I had applied for a different position within the firm, but after looking at my survey experience, they decided that they wanted me in this role. (Use LinkedIn!)

At the firm, I worked mostly with customer-satisfaction surveys, which is a form of market research. I saw this position as a chance to learn new methodologies and get better at writing questionnaires, coding data, and working with different software programs.

To finally segue into how I got the Research Analyst position, a former co-worker was already working at Ipsos. At the first firm, he had worked in the communications department, which did the health-oriented work I was most interested in. I reached out on LinkedIn to ask about his work and if he was working directly with data or doing the more operational duties I wanted to transition out of. He explained that researchers at Ipsos focus on the process of data analysis and crafting an actionable story in partnership with their clients. It is quantitative but there is that art to it. After hearing what Ipsos had to offer, I decided to apply for a position there. I had already had a phone interview and a video interview when I left my old job in February, and I received an offer in March.

MyHCN: Is there anything you needed to learn in your new position? 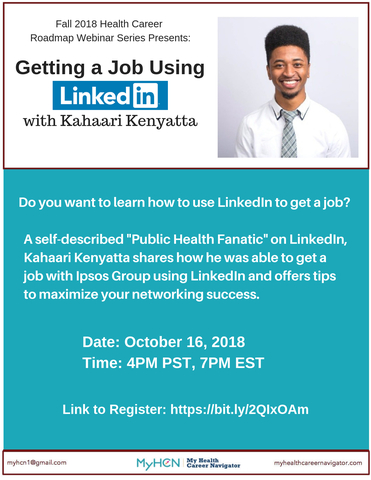 KK: Relationships are everything. In my last position, there was a lot of distrust in the office. In the ten months that I was there, I picked up some behaviors that did not work well at Ipsos. Teams at Ipsos are supportive and lines of communications are open. You are free to be open and ask questions, even if it puts you in a vulnerable position. That has been the biggest thing I’ve been trying to learn. I am learning different communication and management styles and learning to take a step back and look and how I’m responding to things.

MyHCN: What aspect of healthcare are you excited about working on in your current role?

KK: When I graduated from the University of Pennsylvania, I planned on starting an MPH program by this fall, but obviously things have not happened that way. The work I am doing at Ipsos is not what I envisioned myself doing two years ago.

Something I tell a lot of people is learning to be comfortable with uncertainty. When I left undergrad, I had certain interests in the world of healthcare and public health, certain methods that I thought I really liked and envisioned doing more with. A lot of those beliefs have since shifted. I am now a lot more interested in policy and I can appreciate how the private sector can be a helpful part of promoting better population health.

At Ipsos, we work with pharmaceutical companies to help write and analyze surveys so they can understand how doctors and patients engage with their medications. This helps manufacturers market more effectively and develop appropriate medications. This has been a cool way to get back into the more medical side of healthcare. I thought of entering medicine for a time, and it has been interesting to see this side of things. I work a lot with respiratory medications and have learned a lot about physiology and how different competitors stack up.

For the position I am currently in, yes, I had to be a good candidate and know what I know, but I also have my former colleague to thank for advocating for me and getting me on the top of the list.

I would love for my team to send me to Penn. I want to let students know about the different jobs in healthcare that they may not know about. Are you a researcher? Are you interested in medicine or healthcare but you don’t want to be at the bedside? Or you feel medical school is not for you? There are a lot of jobs out there for you that you may not know exist.

Kahaari Kenyatta is a Research Analyst at Ipsos Healthcare in Washington D.C. Connect with Kahaari on LinkedIn.

You need to be a member of My Health Career Navigator to add comments!

Welcome to
My Health Career Navigator

Senior Manager of Finance and Operations

Looking for extra help on your Statement of Purpose?

Need advising or coaching on the application process?

MyHCN can read and review your essay, and provide one-on-one advising.

Coaching services are now available to you build and navigate your authentic health career plan.

If you are currently applying to graduate programs, we can help you with your Statement of Purpose! We offer a range of review services, including:

If you would like more information on our Statement of Purpose Review Services, or our other coaching services, please contact us at
myhcn1@gmail.com

Hello!There is an interview of mine on the coming Saturday.I need expert advice on what is appropriate clothing to wear at the interview other than a suit?I searched a lot and found that jeggings and dress shirts are good, but before buy it from…Continue

My mom died because of a brain tumor, the doctor told us it can be heredity, so there is a chance that it will pass to me. I am afraid now because of the symptoms, i started to have headaches every morning and it worsens every day. My friend told me…Continue

How to Prepare for a Medical School Interview